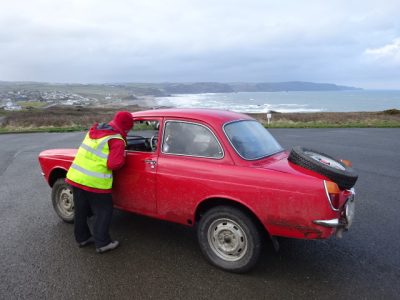  Oh What a Night ( It was. It really was!). Courtesy of the Four Seasons!
The view from the passenger seat. VW Notchback Comp No 167. Driver Dean Vowden.

The event turned out to be one of the most memorable of MCC events that Dean and myself have competed in due mainly to the night run and to some observed hills being more challenging than in the past.
The 96th Lands End certainly tested the endurance of the competitor and the reliability of machine. The weather during the night run, over the wilds of Exmoor gave the event the uniqueness that can only be experienced in MCC trials.
How to describe the whole ambiance of the trial is not easy, the eagerness, the excitement, the apprehension, the feeling of achievement are all elements of participating in an event which is a particular oddity of Englishness. There is nothing else like it.
It is interesting how some moments or observed sections remain firmly in ones memory, one of which was my first experience of marshalling on a MCC trial. In 1977 the Exeter came to Slippery Sam, called Higher Rocombe at that time. The first competitors arrived early, while still dark, being at the top of the hill they could be heard but not seen, some were struggling and being helped by marshals, the voices and sounds coming up to me creating a wonderful theatre. I can still feel the atmosphere to this day, another memory was helping a competitor who was pushing his road going Suzuki up the hill, he was exhausted and on the point of collapse, luckily I had taken a chair to sit on, this proved to be his salvation, he sat on it, recovered his energy and went on his way. For me this years Lands End had not lost any of that atmosphere, charisma, excitement, attraction, call it what you may.
Memories of the 2018 Lands End are the extreme weather experienced during the night, heavy rain, high winds, mist, fog, flooded roads, water running like rivers off the roadside banks, even some snow on Porlock. Concentration had to be at a maximum for miles on end. Motorcyclists and open top car competitors found their waterproof clothing and equipment tested to the maximum.
As the route unfolded the following thoughts about the sections occurred.
Felons Oak. Would the restart box be so short that stopping completely astride it could happen.
Sutcombe. How rough would the restart area be? We need not have worried as the stream at the start of the section had turned into a river causing the section to be cancelled.
Crackington. Would it be doctored with slurry at the top making it difficult for the early runners. No problem this year.
Laneskin. Did not think it would be difficult but discovered it was on arriving at the section.
Hoskins. Where best to stop on the restart? Would it be wet? No problem, Dean got it just right.
Bishops Wood. Would our restart on the muddy ramp be a problem. OK this year with less wheelspin than last.
Blue Hills 1. How wet and polished would the cobbled ramp be? Not a problem, it was completely dry!

Old Stoney. Thought it would be OK. It was, but the car had to jump and leap its way to the top. It seemed rougher this year.
An excellent event and Joy of Joys the Cornish weather had turned up trumps and for most of the daylight hills the sun had shone, it was ‘Four Seasons’ in one day. The route and scenery were great and the drive to the finish could not have been better.
The main day of the trial was Dean’s birthday, what better way could there have been to celebrate it! 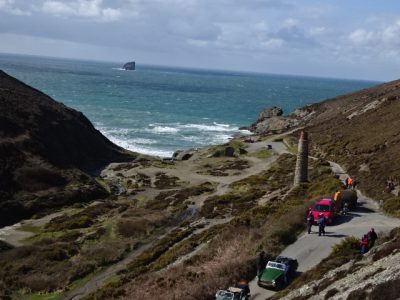 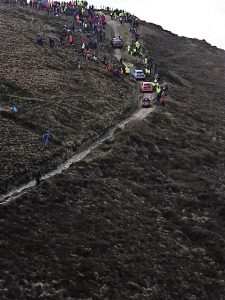 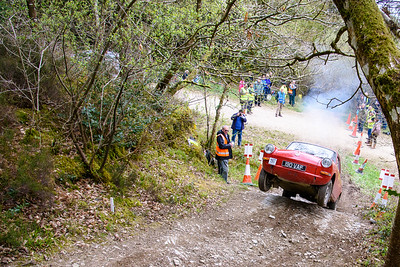